Your region determines what type of grit you’ll find in your waste stream.

The Findings
In 2010, GritTech and Smith & Loveless in association with CH2MHIll, performed a comprehensive study comparing grit characterization profiles of 70 full-scale certified WWTP grit tests conducted across all domestic sectors with established U.S. Geological Survey river bed-sediment data. The results of the WEFTEC paper concluded the following:1) Seventy-four (74%) of all incoming WWTP grit was at least 300 microns and larger, and more than 85% was 150 microns and larger.1 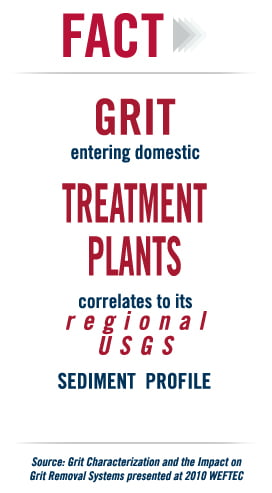