Q&A: Getting The Grit Out With Hydraulic Forced Vortex Systems 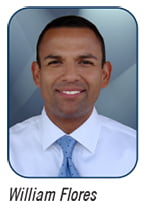 For wastewater treatment operations at municipal treatment plants and industrial sites, grit can be a major problem. If not addressed properly, it can gather in digesters, clarifiers, and aeration basins, requiring time-wasting removal by staff.

Operations rely on grit removal systems to keep this from happening, but not every technology is made the same.

To weigh the options, we sat down with our own William Flores, Vice President, Municipal Systems.

We discussed grit, wastewater plant efficiency, and one new option that has had dramatic results.

What is grit, and why should it be removed at municipal treatment plants and industrial facilities?

Grit is heavy mineral matter consisting of a variety of particles including sand, gravel, cinder, and other heavy, discrete inorganic materials typically ranging from 100 to 300 microns in size that can cause problems for a variety of wastewater treatment processes. Grit removal systems are designed to remove these particles primarily from wastewater streams at municipal treatment plants and resource recovery facilities. These systems can also be used to remove similar-sized inorganic particles at industrial sites and other facilities, like sand from intakes at potable water plants and power plants, and cullet (glass particles) at bottling facilities.

How are things changing in the headworks stage, namely grit removal? Why is performance there becoming so important?

In recent years, the significant budgetary pressures felt by designers and operators have resulted in an increased emphasis on protecting equipment infrastructure and improving operational facilities, two of the primary functions of any facility. The escalating application of membrane bioreactors (MBRs), specialized pumping equipment, and fine bubble diffusers drives investment in grit removal systems and other types of protective headworks equipment, which maximize the performance of these newer technologies.

What kind of problems does grit pose for overall treatment plant performance?

If not effectively removed by a grit removal system, grit accumulates in downstream aeration basins, clarifiers, and digesters, requiring manual removal by staff. Therefore, investment in grit removal is an effective way for sites to minimize long-term operation costs. Abrasive grit can scour and plug lines and foul specific types of equipment like diffusers and membranes. In general, the effects of accumulated grit will reduce the intended service life of most types of wastewater equipment. A two percent increase in grit removal efficiency translates to tons more grit removed per year and, therefore, significant savings in handling and disposal costs.

What range is there for the grit removal systems available on the market? How have they evolved recently to meet users’ needs? 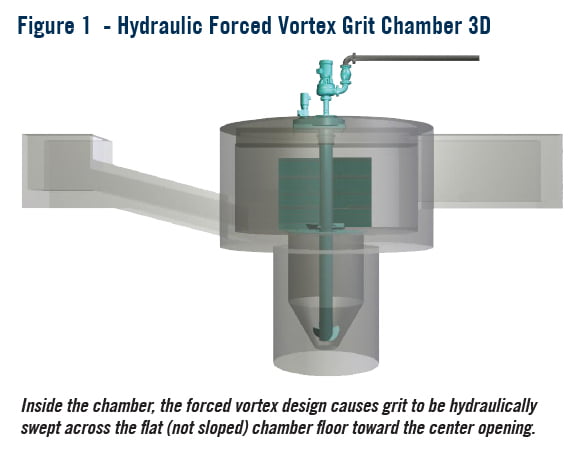 Conventional vortex systems tend to offer removal efficiencies of 95 percent for particles larger than 300 microns, 85 percent for particles between 300 and 210 microns, and 65 percent for grit smaller than 210 microns. But recent developments in hydraulic control technology have paved the way for forced vortex systems to provide the finest grit removal, including a 95 percent removal efficiency across all flows for grit down to 100 microns. Offering a 10:1 turndown ratio, these systems do not experience diminished efficiencies during low or peak flow conditions.

How have hydraulic forced vortex grit chambers taken the next step in this evolution? 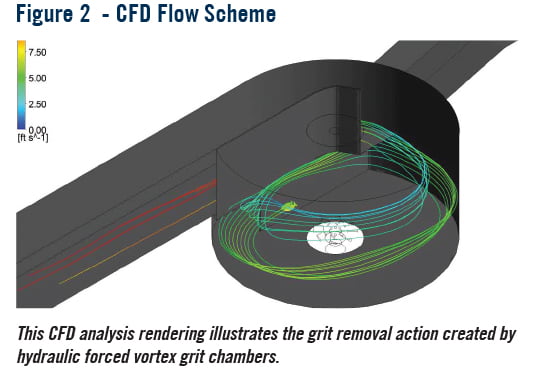 The leading removal efficiencies supplied by these 360-degree systems are obtained through the use of flow control baffles, which maintain incoming flows in the ideal velocity range and promote the ideal flow path along the flat-floor chamber and into the collection hopper (see Figure 2 for CFD modeling) These baffles have the added benefit of reducing system footprint (including size of chamber and number of units required), eliminating the need for downstream level control devices and allowing a 10:1 turndown from max flow.

Another type of forced vortex system, introduced in 2015, utilizes a specially designed ring-and-tunnel system to achieve effective hydraulic control. This system is able to obtain the same leading removal efficiencies found in the baffled 360-degree chambers, but with the added benefit of offering full variability of the inlet and outlet channels up to almost any angle. This permits design layouts beyond the conventional arrangements, providing simple installation into existing sites or efficient placement for new ones. 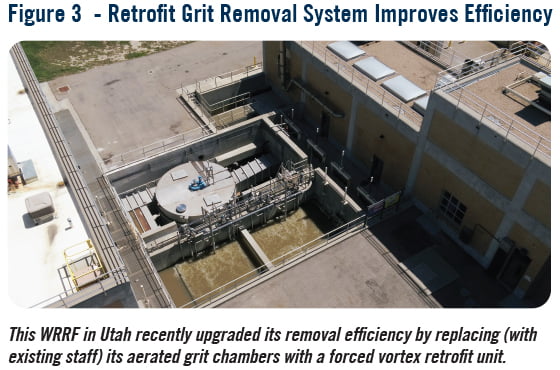 Advanced velocity and hydraulic control have also led to the possibility of retrofitting existing, older-style vortex grit chambers to improve removal efficiency performance for less of an investment than a system replacement. A unique retrofit baffle system that inserts directly into existing 270-degree grit chambers has hit the market. This retrofit allows systems designed to meet previous standards to be upgraded to remove 95 percent of all grit down to 150 microns. These retrofit baffles can be inserted into many different types and brands of 270-degree systems, including sloped and cone-shaped chambers (see Figure 3 for example of retrofitting Aerated Grit Chambers).

Are these newer types of systems supported by full-scale testing or documented results?

Despite the recentness of some developments, there is clear evidence of the effectiveness of these hydraulic forced vortex grit removal systems. In many cases, these test results reveal the systems are even exceeding the system’s stated performance criteria. For example, a recent upgrade to a 40-MGD treatment plant in Central Florida included the addition of two 360-degree hydraulic forced vortex grit chambers with integral velocity control baffling. After more than a year in service, removal efficiency testing was conducted, which revealed the systems were removing more than 99 percent of grit down to 105 microns in size. A smaller 4-MGD plant located in the Great Lakes region of Wisconsin upgraded to the same 360-degree forced vortex model and has revealed similar results. Removal efficiency testing was conducted there after a year in service and revealed the system is removing 95 percent of all grit down to 105 microns.

The performance of the recently introduced ring-and-tunnel forced vortex system was demonstrated at the location of the first-ever installation of that type. For this treatment plant upgrade in Northern Indiana, two 20-MGD, 360-degree grit chambers were installed into existing detritor grit basins to minimize new construction costs. Also utilizing the existing influent/effluent channels, the system was arranged at a 270-degree angle per the plant layout. Grit removal efficiency testing conducted later in the year revealed the system is removing 99 percent of all grit, including fine grit particles down to 100 microns. The effectiveness of the retrofit baffle system for 270-degree chambers has been best demonstrated at a very large Texas treatment plant processing 150 MGD. This plant operates four 270-degree chambers rated to remove 95 percent of grit measuring greater than 300 microns, but the removal efficiency dipped down for smaller particles to as low as 65 percent for grit between 150 and 200 microns. Therefore, the retrofit baffle system was outfitted into one of the existing chambers for side-by-side testing with one of the existing units. The testing revealed that the original, non-modified unit removed 97 percent of grit larger than 300 microns, but only 85 percent of grit between 212 and 300 microns and 73 percent of grit larger than 150 microns.

The unit retrofitted with the flow control baffle, however, revealed an excellent cumulative removal percentage of 97 percent of grit larger than 150 microns. These are just a few examples of the effectiveness of forced vortex systems. The PISTA® brand has more than 2,600 active installations.

Where do you see the future of this technology going? 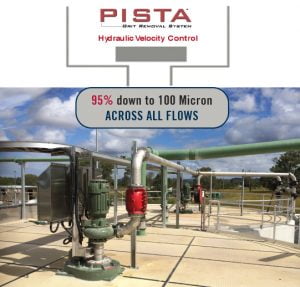 Ongoing R&D, the emergence of computation fluid dynamics, and intensifying industry competition will continue to drive the development of grit removal technology. Smith & Loveless recently opened the industry’s first grit removal research center featuring a fully-functional 4-MGD grit removal system (see Figure 4 for underwater images from the center), and this has been instrumental in the development of some of the recent technologies mentioned in this Q&A.

It seems fair to assume that innovations will continue at this rapid pace moving forward. In addition to providing effective grit removal, the newest technologies are being developed with the needs of today’s plants and industrial facilities in mind, including the need to reduce equipment footprint, energy usage, and operation and maintenance requirements.

Have your own question?  Ask William below…