The method used to collect grit during a test drastically affects the amount collected, and therefore, the results of the test.

As demonstrated at S&L’s Grit Removal Research Center, the Cross-Channel Sampling method collects a larger representative grit sample, while the Vertical Integrated Sampler created velocity disturbances and disrupted the flow. The VIS sampling device actually pushed grit away from the sampler. This is demonstrated by underwater photography and CFD analysis below.

Example of data collected via the multi-positioned CCS method of sampling across the channel. 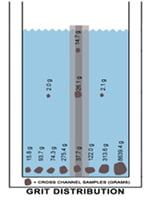 A scene from a CCS grit test. 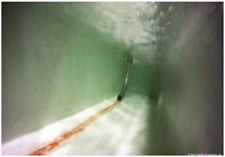 Taken with an underwater camera, the CCS probe collects the grit along the channel floor with minimal impact on flow patterns. Because the CCS sampler does not create velocity changes in the channel, it does not disturb the flow path of the grit allowing for the CCS sampler to collect a representative grit sample and accurate grit testing. 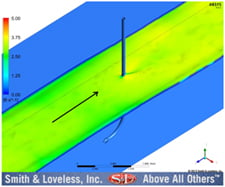 When flow is introduced into the channel, the CCS sampler probe does not affect normal velocity of flume currents. The scale to the left of the figure depicts velocity levels, where blue shows the lowest velocities and red show the highest velocities in the channel. The velocity is at ideal range of 1.6 – 3.5 ft./s
(0.5 – 1.1 m/s). 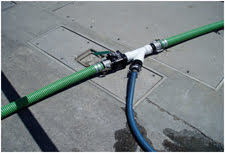 Wye Splitting practices should be discontinued because grit will tend to go straight then suddenly flowing left and flow consistently, which can taint the sample and consequently the grit characterization results — often in the favor of lighter grit. 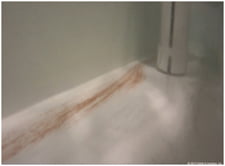 Taken with an underwater camera, the grit is introduced into the channel. The VIS sampler probe does not collect a true representative sample of grit in the left photo and in the right photo actually diverts grit away from entering the sampler opening due to the velocity change created by the VIS sampling device, which prevents the VIS sampler from collecting a representative grit sample.

When flow is introduced into the channel, the VIS sampler probe effects the velocity by disturbing the flume currents. The scale to the left of the figure depicts velocity levels, where blue shows the lowest velocities and red show the highest velocities in the channel. As the flow reaches the sampler opening, velocities reach 5 ft/second (1.5 m/s) around the sampler, which disturbs the grit flow and hinders collection of a representative grit sample.